FROM A COP, FOR ALL WOMEN

In daylight hours, refresh yourself of these things to do in an emergency situation. This is for you, and for you to share with your wife, your children, & everyone you know.

1. Tip from Tae Kwon Do: The elbow is the strongest point on your body. If you are close enough to use it, do!

3. If you are ever thrown into the trunk of a car, kick out the back tail lights and stick your arm out the hole and start waving like crazy..The driver won’t see you, but everybody else will. This has saved lives.

4. Women have a tendency to get into their cars after shopping, eating, working, etc., and just sit (doing their checkbook, or making a list, etc.) DON’T DO THIS! The predator will be watching you, and this is the perfect opportunity for him to get in on the passenger side, put a gun to your head, and tell you where to go. AS SOON AS YOU GET INTO YOUR CAR, LOCK THE DOORS AND LEAVE. If someone is in the car with a gun to your head DO NOT DRIVE OFF, Repeat: DO NOT DRIVE OFF! Instead gun the engine and speed into anything, wrecking the car. Your Air Bag will save you. If the person is in the back seat they will get the worst of it. As soon as the car crashes bail out and run. It is better than having them find your body in a remote location.

5. A few notes about getting into your car in a parking lot, or parking garage:

6. ALWAYS take the elevator instead of the stairs. Stairwells are horrible places to be alone and the perfect crime spot. This is especially true at NIGHT!)

7. If the predator has a gun and you are not under his control, ALWAYS RUN! The predator will only hit you (a running target) 4 in 100 times; and even then, it most likely WILL NOT be a vital organ. RUN, preferably in a zig-zag pattern!

8. As women, we are always trying to be sympathetic: STOP It may get you raped, or killed. Ted Bundy, the serial killer, was a good-looking, well-educated man, who ALWAYS played on the sympathies of unsuspecting women. He walked with a cane, or a limp, and often asked ‘for help’ into his vehicle or with his vehicle, which is when he abducted his next victim.

9. Another Safety Point: Someone just told me that her friend heard a crying baby on her porch the night before last, and she called the police because it was late and she thought it was weird. The police told her ‘Whatever you do, DO NOT open the door.’ The lady then said that it sounded like the baby had crawled near a window, and she was worried that it would crawl to the street and get run over. The policeman said, ‘We already have a unit on the way, whatever you do, DO NOT open the door.’ He told her that they think a serial killer has a baby’s cry recorded and uses it to coax women out of their homes thinking that someone dropped off a baby. He said they have not verified it, but have had several calls by women saying that they hear baby’s cries outside their doors when they’re home alone at night.

10. Water scam! If you wake up in the middle of the night to hear all your taps outside running or what you think is a burst pipe, DO NOT GO OUT TO INVESTIGATE! These people turn on all your outside taps full blast so that you will go out to investigate and then attack.

1:00 pm in the afternoon, and Lauren was driving to visit a friend, when an UNMARKED police car pulled up behind her and put its lights on. Lauren’s parents have 4 children (of various ages) and have always told them never to pull over for an unmarked car on the side of the road, but rather wait until they get to a service station, etc. So Lauren remembered her parents’ advice, and telephoned 112 from her mobile phone.

This connected her to the police dispatcher. She told the dispatcher that there was an unmarked car with a flashing blue light behind her and that she would not pull over right away but wait until she was in a service station or busy area. The dispatcher checked to see if there was a police car where she was and there wasn’t and he told her to keep driving, remain calm and that he had back-up already on the way.

Ten minutes later four police cars surrounded her and the unmarked car behind her. … One policeman went to her side and the others surrounded the car behind. They pulled the guy from the car and tackled him to the ground … the man was a convicted rapist and wanted for other crimes.

You obviously need to make some signals that you acknowledge them (i.e. put on your hazard lights) or call 112 like Lauren did. Too bad the mobile phone companies don’t give you this little bit of wonderful information. So now it’s your turn to let your friends know about 112 (112 is an emergency number on your mobile that takes you straight to the police because 911 does not work if you have no signal).

1. Do not lie down while waiting for the EMT!

2. Bayer is making crystal aspirin to dissolve under the tongue. They work much faster than the tablets.

3. Keep aspirin by your bedside!

4. There are other symptoms of an heart attack besides the pain on the left arm. One must also be aware of an intense pain on the chin, as well as nausea and lots of sweating, however these symptoms may also occur less frequently. Note: There may be NO pain in the chest during a heart attack

5. The majority of people (about 60%) who had a heart attack during their sleep, did not wake up. However, if it occurs, the chest pain may wake you up from your deep sleep.

6. Immediately dissolve two aspirins in your mouth and swallow them with a bit of water. CALL 911
– say “heart attack!”
– say that you have taken 2 aspirins
– phone a neighbor or a family member who lives very close by
– take a seat on a chair or sofa near the front door and wait for their arrival and…
– DO NOT lie down

DEFIBRILLATOR, FIND IT, GRAB IT, USE IT.

We have all walked by the Red Cross sign in airports indicating where a heart machine is located.

Do you know what is in them and how to use it? Take a few minutes today to learn the basics… who knows, you could be saving a life tomorrow.

Keep in mind this treatment of burns is being included in teaching beginner fireman. First Aid consists of first spraying cold water on the affected area until the heat is reduced which stops the continued burning of all layers of the skin. Then, spread egg whites onto the affected area.

One woman burned a large part of her hand with boiling water. In spite of the pain, she ran cold faucet water on her hand, separated 2 egg whites from the yolks, beat them slightly and dipped her hand in the solution. The whites then dried and formed a protective layer.

She later learned that the egg white is a natural collagen and continued during at least one hour to apply layer upon layer of beaten egg white. By afternoon she no longer felt any pain and the next day there was hardly a trace of the burn. 10 days later, no trace was left at all and her skin had regained its normal color. The burned area was totally regenerated thanks to the collagen in the egg whites, a placenta full of vitamins.

Conscientiously wash your hands before eating or cooking!
Carefully keep raw meat and chicken from contaminating your kitchen.
Always wipe down those shopping cart handles.

WHERE ARE THE MOST GERMS? (Test)

Which of these do you think has the highest bacterial count?

The answer! — the restaurant menu. 100 times the germs found on a typical toilet seat.

GERMS AT THE SUPERMARKET

SHOULD WE EMBRACE OUR MILITARY MORE, WHO PROTECT US EVERY DAY?

This film was made by a 15 year old girl, Lizzie Palmer, who put this YouTube program together. Please watch all of it … and … please pass it on!!

IF YOU EVER GET DEPRESSED RECONSIDER

BE THANKFUL
By Author Unknown

Be thankful that you don’t already have everything you desire.
If you did, what would there be to look forward to?

Be thankful when you don’t know something,
for it gives you the opportunity to learn.

Be thankful for the difficult times.
During those times you grow.

Be thankful for your limitations,
because they give you opportunities for improvement.

Be thankful for each new challenge,
because it will build your strength and character.

Be thankful for your mistakes.
They will teach you valuable lessons.

Be thankful when you’re tired and weary,
because it means you’ve made a difference.

Gratitude can turn a negative into a positive.
Find a way to be thankful for your troubles,
and they can become your blessings.

All cell phone numbers are now public!! Add your number to the

LIVE IN CT, OVER 62, free college courses!
For Sheridan Vernon, learning never gets too old (PDF)

Trusted expertise is just a phone call away. 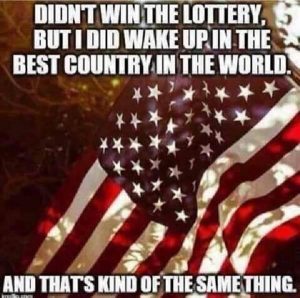